The title of the exhibition might suggest a gathering of crowd-pleasing Old Masters to celebrate the 200th anniversary of the Prado. Instead, the curator Alejandro Vergara tackles an intellectually challenging topic, exploring how nineteenth- and twentieth-century nationalism formed the discipline of art history and defined how we conceive of traditions as inherently “Dutch” or necessarily “Spanish.” The impressive installation draws on numerous masterpieces of Baroque painting, many borrowed from the Rijksmuseum, to make an impassioned case that, despite being separated by warfare, economic rivalry, and differing conceptions of Christianity, Habsburg Spain and The Dutch Republic were bound by common artistic, cultural, and philosophical traditions. In his catalogue essay, Vergara demonstrates how histories of Dutch and Spanish art remain constrained by Hegel and other nineteenth-century philosophers who defined the fervor of nationalist Geist. Countering these dominant histories, the exhibition explicates a common language founded in the tenebrism of Caravaggio and the palette of Titian. It is a visual dialogue of space, color and composition that unites two countries decisively separated by different conceptions of what constituted Christianity. Visitors to the Prado exhibition may be inclined to interpret this theme within the context of current political affairs. Indeed, the show comes off as a powerful expression of support for European integration, now under attack.

For a historian of seventeenth-century Dutch art (primarily), the joy of this exhibition is reconfiguring the language of exceptionalism that continues to drive histories of Dutch art. As the opening row of portraits by artists such as Carel Fabritius and El Greco beautifully articulates, the shifting codes of fashion reveal a complex visual language about propriety, modesty, and flare expressed through sumptuous black fabrics and intricate collars that trace their roots to the fifteenth-century Burgundian court. The exhibition quickly moves, however, beyond the sartorial to consider the profound formal questions of composition, light, and color on a monumental scale. 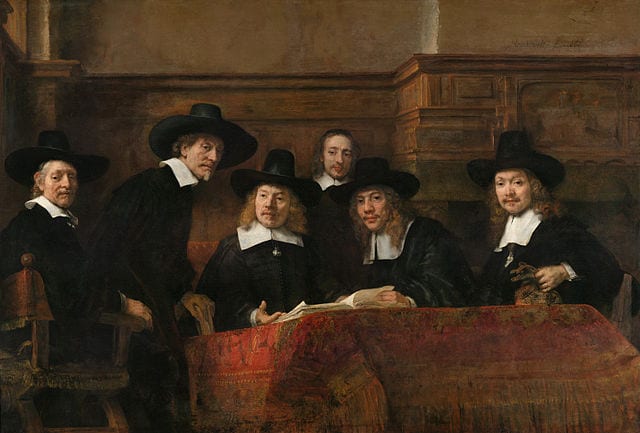 Perhaps the most stunning comparison is Rembrandt’s Syndics of the Drapers’ Guild (fig. 1) next to Velázquez’s Feast of Bacchus (fig. 2). Two group portraits confront the viewer while the wall label argues that the works share similarities of composition and color. Whereas Rembrandt’s painting is often described as an embodiment of the “Dutch” burgher mentalité, Velázquez’s work was so beloved by Philip IV that it hung in his bedroom. For Alois Riegl, Rembrandt’s painting was the “end point of the national Dutch development.” The men are unified in the compositional plane, as they gaze out at the viewer, implicating her in the scene of reckoning the account books. It is a virtuoso ability to balance an internal coherence while also engaging with the beholder’s presence. In marked contrast, Velázquez presents a scene of debauchery, in which all the actors internally attend only to one another, except for a central figure who shines an unsettling grin at the viewer. Both painters engage directly with the viewer to unsettle the scene, to examine the nature of the historical encounter, and the ways in which works of art cross temporal periods into distinct futures. 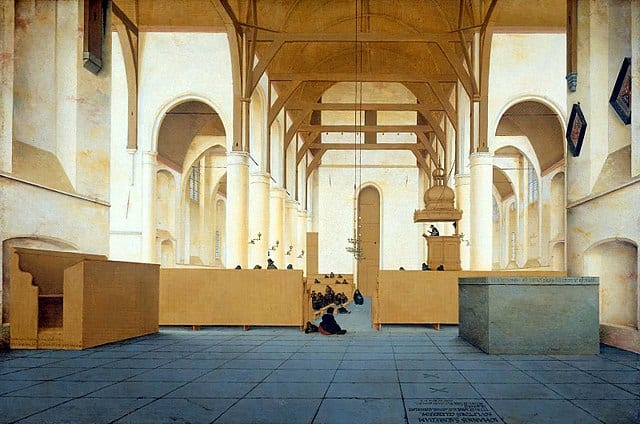 In another surprising juxtaposition, Pieter Jansz. Saenredam’s Interior of the Sint-Odulphuskerk in Assendelft (fig. 3) is installed next to Zurbarán’s still-life of a bound lamb, Agnus Dei (fig. 4). In Zurbarán’s canvas, the lamb gives himself to the beholder, his wool yellowing and white, soft and matted, a ground primed the stain of his blood. The painting renders John’s testimony: “Behold the lamb of God,” a sacrifice that will resolve original sin. In contrast, Saenredam’s painting is also a meditation on violence and whiteness, or what Barthes termed in his description of Saenredam’s paintings as “the beige and innocuous unction of butterscotch ice cream.” Whereas John’s text testifies to the certainty of Christ’s sacrifice to take the sin of the world upon himself, Calvin introduced the uncertainty of predestination in which an individual is either called or not by God’s grace. This comparison displays an emptying out of a certain divinity in favor of a meditation on violence and silence, and the ways in which God becomes both inscribed into and absented from flesh and walls.

Despite these extraordinary comparisons, the compelling thesis in its aesthetically evocative attention to a shared language of form could have benefitted from a deeper consideration of the intertwined economic interests of these two trans-Atlantic powers. For example, Spain’s expulsion of its Jews was central to the economic prosperity of the Dutch Republic in the seventeenth century as Sephardic merchants were key players in the rise of the West India Company. As many recent scholars of the trans-Atlantic world have demonstrated, it was an entangled ground in which nations were mutually dependent on one another for their economic interests as both the Dutch and the Spanish (and the English, French, and Portuguese) traded and economically benefitted from one another while fighting for control over their colonies.[1] In their trenchant study, The Dutch Atlantic: Slavery, Abolition, and Emancipation, Kwame Nimako and Glenn Willemsen (London, 2011) have demonstrated how the slave trade was central to economic prosperity in the Netherlands while also arguing that the Peace of Westphalia (1648) was central to the rise of the modern nation-state. In this vein, therefore, let us consider a comparison that was not in the exhibition yet would be equally instructive in examining the interrelated formal and economic histories between Spain and the Dutch Republic. In another exhibition, the curators could have installed Rembrandt’s Baptism of the Eunuch and Velázquez’s Kitchen Maid with Supper at Emmaus, two works that engage with the global mission of conversion undertaken by both the Dutch and the Spanish. Rembrandt’s scene of baptism pictures the founding of the Christian church in Ethiopia, and his attention to the royal eunuch (attended to by his own slave) cannot be separated from the Dutch involvement in the slave trade to further their interests in sugar plantations in Brazil. In turn, Velázquez’s Kitchen Maid often is discussed in relationship to his own slave, the artist in his studio Juan de Pareja, whom he freed in Rome. Velázquez is often cited as one of the first early-modern artists to make visible the prominent populations of black and liberated slaves in Spain, as Seville was one of the major slave markets in Western Europe from the fifteenth century.

This is not the history, however, that this exhibition wants to consider although it is just as relevant and vital to the questions of nationalism in Europe against which the exhibition and the catalogue blatantly are positioned. The words of José Ortega y Gasset are painted on the walls of the installation, and drive home the central thesis: “The unity of Western painting is one of the great realities that reveals the unity of European culture.” A professor of metaphysics at the Central University of Madrid, Ortega was a theorist who understood a European mentality rooted in the traditions of Greek philosophy, Roman law, and the brilliance of the Renaissance. Yet he also distinguished in his essay “The Dehumanization of Art” between a “Europe whose futuristic instinct, predominant throughout its history, stands in marked contrast to the irremediable traditionalism of the Orient.” Therefore, his presence within the exhibition also raises the question of whose Europe the curators imagine. For the roots of our own global twenty-first century – with the economic disparity, movement of populations, and rise of nationalism and religious intolerance – find a necessary and historically trenchant parallel within Spain and the Dutch Republic in the seventeenth century. The exhibition, therefore, obliquely offers a moment to consider how the ideological roots of the anti-immigration populist words and images ringing out today can be traced to the visual cultures of the seventeenth century, and its own global, economic crises.

A version of this exhibition will travel to be on view at the Rijksmuseumfrom October 11, 2019 through January 19, 2020 under the title Rembrandt – Velázquez. Nederlandse en Spaanse meesters.