This exhibition will reunite around 150 of the most important works for the first time since the seventeenth century, providing an unprecedented opportunity to experience the collection that changed the appreciation of art in England.

Anthony van Dyck’s monumental portraits of the king and his family will form the core of the exhibition, including: Charles I and Henrietta Maria with Prince Charles and Princess Mary (‘The Greate Peece’), 1632 (The Royal Collection), and his two magnificent equestrian portraits, Charles I on Horseback with M. de St. Antoine, 1633 (The Royal Collection), and Charles I on Horseback, 1637-38 (The National Gallery, London). They will be shown together with Van Dyck’s most celebrated portrait of the king, Charles I (‘Le Roi à la chasse’), c.1635 (Musée du Louvre, Paris), which will return to England for the first time since the seventeenth century.

During his reign, Charles I (1600-1649) acquired and commissioned exceptional masterpieces from the fifteenth to the seventeenth century, including works by Van Dyck, Rubens, Holbein, Titian and Mantegna, amongst others. Charles I was executed in 1649 and just months later the collection was offered for sale and dispersed across Europe. Although many works were retrieved by Charles II during the Restoration, others now form the core of collections such as the Musée du Louvre and the Museo Nacional del Prado.

The exhibition is curated by Per Rumberg, Curator, Royal Academy of Arts, and Desmond Shawe-Taylor, Surveyor of The Queen’s Pictures. The exhibition also is accompanied by a catalogue, edited by Desmond Shawe-Taylor and Per Rumberg, and has contributions from  David Ekserdjian, Dr Barbara Furlotti, Gregory Martin, Guido Rebecchini, Vanessa Remington, Dr Karen Serres, Lucy Whitaker, Jeremy Wood and Helen Wyld. 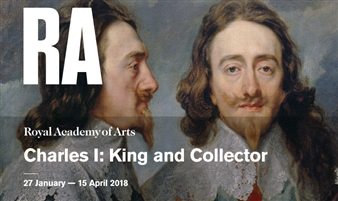