In 1548, Charles V gathers the Seventeen Provinces into one political entity through the institution of the Burgundian circle ; thirty years later, the Dutch revolt shatters this reunion and institutionalizes the rupture with the Union of Utrecht in 1579. Therefore, the creation of a national sentiment, following the terms of an active process of legitimation in the self-appointed United Provinces constitutes a significant issue, as its geographical borders constantly fluctuate throughout the Eighty Years war. This period hence witnesses the progressive definition of a geographical and cultural frame for the Dutch territory, intertwined with a continuous formulation process of local identities. Although it’s only during the XVIIIth century that the term vaderland starts to be commonly used as a national trope of the Dutch Republic – emanating from a preceding regional usage – the sole notion of territory is invested with political meaning as early as the XVIth century in the Netherlands. This symposium aims to study this phenomenon in the visual culture.

In a context of territorial expansion and economic growth, cartography appears as a key element to observe ideological projections and political claims. Metaphorical maps showing the Habsburg territory as a regal woman whose head is shaped by the Iberian Peninsula, or the well-known example of the Leo Belgicus, are evident components of a political rhetoric claiming the historical and cultural integrity for said territories. In the United Provinces, both scientific information and exotic fantasies are superimposed in the many nautical charts that paved the way to its economic hegemony. A close examination of Early Modern painting of interior scenes proves how the iconographic motive of the map became a relevant topos in Dutch visual culture; hence, the visual apprehension of landscape, real or imaginary, retrospectively participates in the rhetoric of the territory in the Netherlands through a variety of genres: topographical views, composite landscapes integrating existing and fantasized elements, local adaptation of foreign monuments, depiction of local folklore that embodies a particular place or region, etc.

This rhetoric does not limit itself to a patriotic gaze towards its domestic territory but also integrates foreign or unfamiliar landscapes in the process of national assertion. Whether it morphs into the narrative of the Dutch Republic as a New Israël, a powerful antiquarianism encouraged by the many journeys of artists in Southern Europe or in the Eastern World or a polished exoticism of the New World, artists interweave and converge reality and imagination by summoning the historical, cultural and religious charge of these territories.

From the creation of a federal State in 1579 to the temporary disappearance of the Stadholderate in 1702, what role did the visual culture play in the political assertion of a national territory? How does the artist’s gaze on the territory, local or foreign, real or imagined, allows us to understand this rhetoric? How exactly are fantasized or real elements of foreign places integrated in a local visual discourse? What do these images reveal of the public who commissions, buys and looks at them? Within the process of national and territorial construction, how are these territorial perspectives integrated and part of the enrichment of the Dutch identity narrative?

Considering the variety of these issues, this symposium aims to shed light on the ways in which Dutch depictions of national and transnational territories participated in the formulation of a shared identity. Multidisciplinary discussions will allow us to examine the terms of territorial imagery in Dutch visual culture, and their links with the formation of a national myth in the Early Modern Dutch Republic. 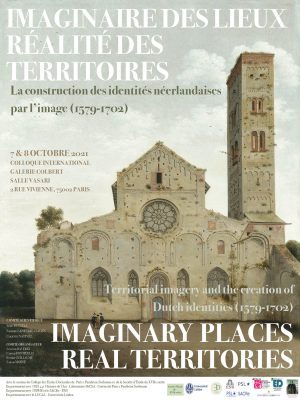