The restored St Peter’s Church is the setting for an experience that touches all the senses. Immerse yourself in the fascinating story of this Gothic church and renew your acquaintance with its art treasures: outstanding works by Flemish Masters in their authentic context. ‘Mixed Reality’ brings Dirk Bouts’ Last Supper to life and lets you discover the vibrant Leuven of the past and present.

The Last Supper by Dirk Bouts, an absolute masterpiece, is undoubtedly the most important highlight of Saint Peter’s Church. Moreover, with the exception of The Martyrdom of Saint Erasmus, it is the only artwork by a Flemish Primitive which, 600 years after it was painted, still hangs in exactly the same place for which it was intended.

Painted between 1464 and 1468, the work was commissioned by the Fraternity of the Blessed Sacrament. Bouts was assisted by two theologians from the (recently founded) University of Leuven to create a completely new representation of The Last Supper. And it was an unparalleled success! Like a director, he transports Jesus and his Apostles to a contemporary setting, 15th-century Leuven. If you look closely, through the window on the left you will see the Grote Markt in Leuven during the building of the town hall. Another striking element is Jesus’ hand blessing the bread. This is the most important moment in the scene and it is therefore the central focus of the painting.

As is customary in Bouts’ works, the figures in the scene looks almost like unmoved actors. Although they are physically present, they appear unmoved and unemotional. It is this typical style that led Bouts to be called ‘the painter of silence’. 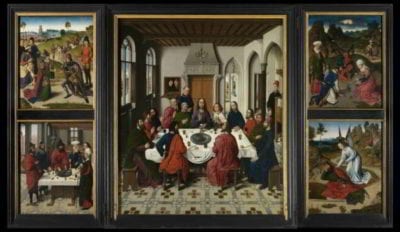 See also: Leuven is setting an extra place for ‘The Last Supper’ an initiative by the M Leuven and the City of Leuven, inspired by this work.