The exhibition Under. Over. Mezzotint and Aquatint in the Collection of the National Library of Latvia will be on display on Level 4 at the National Library of Latvia from 5 October until 30 December 2022. The exhibition completes the series of exhibitions dedicated to printmaking techniques. This time, two tonal intaglio printing techniques – aquatint and mezzotint – are introduced, along with their development, to give a comprehensive overview of the genesis of both techniques.  The exhibition includes prints by Dutch artists such as Jan van Somer, Pieter Schenk I and Jan van Huchtenburg.

Both graphic techniques stand out for their subtle tonal gradation, but in very different ways. In the case of mezzotint, the tone appears as if it comes from darkness – it builds from darker to lighter, while with aquatint the opposite is true. During its brief period of popularity, mezzotint became a suitable means of expression for reproducing oil paintings, as it gave ‘picturesque’ aesthetics with a rich tonal range. In turn, aquatint made it possible to imitate the tonal delicacy and hazy effect of watercolour and ink paintings. Mezzotint was invented in 1642, but the first aquatints did not appear until the 1760s. Both techniques experienced their brief heyday in the second half of the eighteenth century and early nineteenth century as means of reproductive expression, but soon enough, they were replaced for these purposes with media that were faster and more convenient to use – lithography and photography. However, interest in the rich artistic qualities and technical possibilities of these tonal techniques was renewed in the works of art in the nineteenth and twentieth centuries, that led to the significant further development of mezzotint and aquatint. Nowadays, the possibilities offered by aquatint and mezzotint, are used by a relatively small group of artists.

Works by artists from Dutch, English, French, Italian, Estonian, Russian, and Latvian national schools can be viewed in the exhibition, selected from the works included in the Graphic Art Collection of the National Library of Latvia, mainly consisting of the German art scientist and collector Peter Böttger’s gift to the library. They reveal the development of both techniques, starting from the early mezzotint examples from the 17th century and the exotic landscapes by the eighteenth century pioneer of aquatint Jean-Baptiste le Prince to the versatile artistic findings in examples of both techniques in the second half of the 20th century. The aquatint of the 21st century is represented by Tatjana Krivenkova, and mezzotint – by Guntars Sietins, giving an insight into the diversity of prints in modern Latvia.

The exhibition has been implemented with the support of the State Research Programme’s Latvian Culture – a Resource for National Development project Cultural Capital as a Resource for Sustainable Development (No VPP-KM-LKRVA-2020/1-0003), which is financed by the Ministry of Culture of the Republic of Latvia. The State Research Programme is adminstered by the Latvian Council of Science. 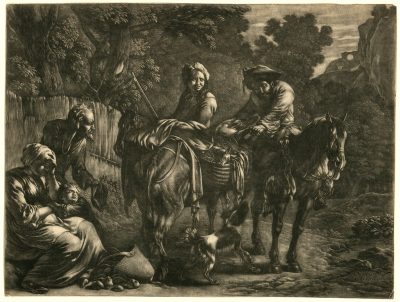