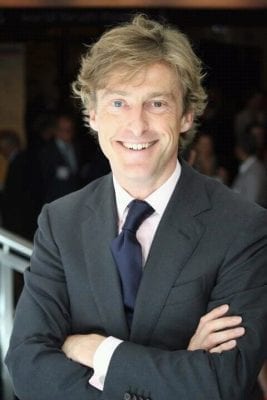 On July 16, 2018, HNA vice-president Louisa Wood Ruby interviewed Joost Taverne, the recently-appointed Cultural Attaché for the Consulate General of the Netherlands in New York. Her first question was how he felt about his new position and what it entails.

Joost Taverne: As Cultural Attaché, I am responsible for all we do in culture, arts, and creative industries throughout the Dutch diplomatic network in the United States. In addition to the embassy in Washington D.C., we have consulates general in San Francisco, Chicago, Miami, and here in New York. We promote all cultural disciplines from the Netherlands, from 17th century Netherlandish art to electronic dance music, design, and more. Literally everything we have to offer. It’s always interesting to live and work in the US, and I work with wonderful people. I’m happy here.

Louisa: What did you do until you took on this position in 2017?

Joost: I was in the diplomatic service at the embassy in Washington, D.C. from 2006-2010. I represented the Netherlands Ministry of Education, Culture and Science from a policy perspective. Then, since I still had all these opinions about the Netherlands, I decided to put my money where my mouth was, and ran for Parliament. I served two terms. Then I felt I had served my country enough in that capacity and wanted to go back to diplomatic service. This position came up, and due to my experience in the US and my cultural policy experience, it made a good fit.

Louisa: What is your background?

Joost: I grew up in Amsterdam, where every Sunday my mother would take my sister and me against our wills to all the museums, which turns out to be quite handy now. So I’ve been a consumer of arts and culture in my own country and also during my years abroad. It’s a wonderful area to work in. I’m working with wonderful people here in this office, including Sophie [van Doornmalen, Senior Cultural Officer, Shared Cultural Heritage and Dutch Old Masters], who started in February. She’s in charge of old masters and our shared cultural heritage. Her job is to fill me in on the details of cultural matters.

Louisa: What is your vision for bringing Dutch culture to the United States? Are there opportunities that haven’t been maximized?

Joost: The Netherlands has only had a Cultural Attaché in the United States for 25 years, so it is relatively new compared to the more than 400-year relationship between our two nations. The Dutch government created the position because the United States is one of most important export markets for Dutch arts, culture, and creative industries. So it is useful and productive to be actively involved here. We have an operation like this in only seven other countries: Belgium/Flanders, China, Germany, France, Indonesia, Turkey, the United Kingdom. Our mission is based on demand we see from our partners. Here’s how it works: First, we have to know what arts and culture to export. The Dutch government funds a wide variety of arts and culture in the Netherlands, but it doesn’t want to judge what is good and bad. So we outsource those judgments to a range of foundations, including, for example, one for performing arts and one for literature. They decide what is quality and what talent is eligible for support going abroad. That’s where I take my cues, where I know what artwork and artists I should to try to exhibit or find performances for. Once I know that, I look for organizations, museums, institutions, and stages in the US that are interested in showing Dutch art and talent. When it works out, it’s a co-production. In our experience, that’s how it works best. There has to be a demand for what we export. If the involvement and partnership is there, it is always successful.

Louisa: How do you see HNA and your consulate working together? In the past, your support has been important for our conferences, which we are now increasing in frequency from one every four years to one every three years in order to maintain momentum and continuity. So we are already looking at locations for the next conferences, which we will hold in 2021, 2024, and 2027. How could we help you or interact with you?

Joost: Your existence alone is of great help because you focus on 17th century Netherlandish art. That’s such a recognizable part of our art history. It’s invaluable in terms of branding. In that respect, having a US-based organization with professionals who are working on that particular part of Dutch history and art, such as yours, is of immense value to us. We could all use more staff, including our diplomatic network, and since we serve all different disciplines, we have to work together and rely on outside groups with the actual knowledge. And that period of art is the best informal ambassador to other countries. Dutch art is spread throughout the US. You can often bump into a Dutch painting if you drive across the country, so that’s the starting point. In terms of what we can do for you, we are a network organization, so we can connect people and organizations under a government umbrella organization when it’s helpful. We are always happy and willing to step in, in these cases. It’s indeed about networking and supporting small events. We lack the funds and knowledge to take it on alone, but it is upon us to be thankful and helpful where we can with groups such as yours that have a nerve system in this country. And we already see this happening, with Mr. Abram’s collection of drawings that he gave to Harvard in large part and the donation of the Van Otterloos and Weatherbies to the Museum of Fine Arts, Boston. When people make their collections available, it has a positive effect on the Netherlands as a whole. That’s why we appreciate them so highly. George Abrams was even decorated for it, and Ronni Baer also.

Louisa: It seems like Boston has become a nerve center for Dutch art.

Louisa: It’s a little sad in New York now because, while we do have great collections here, particularly the Morgan Library, the Metropolitan Museum of Art and The Frick Collection, at present New York University’s Institute of Fine Arts has no professor of 17th century art of any country. So that’s an area where perhaps HNA or the Dutch could step in.

Joost: What do you think either of us could do?

Louisa: It would involve endowing a chair. Some of us in HNA are planning to talk with Christine Poggi, the head of the IFA about it.

Joost: If there’s anything we can do to push it, we will. We can make it known that this is missing. You can’t top donating collections, which George Abrams, the Van Otterloos, and the Weatherbies have done, but there is still room for doing something else, and it might be interesting for some people with an affinity for Dutch art. The Center for Netherlandish Art in Boston plans to have a certain percentage on display at any given time, so that opens a lot of opportunities for other institutions to borrow. We are following Boston closely as it maneuvers itself up the ranks.

Joost: Yes, they are working hard to flesh out what the center should be like, and they’ve come a long way. What I find interesting from the Dutch perspective is that it’s un-Dutch to give away your collection and un-American not to want your name on it.

Louisa: The best of both worlds then!

Louisa: Do you support smaller institutions, like university museums? At one point the consulate had the idea of making a database of Dutch of paintings in America. That’s a huge task, but could be useful if done right.

Joost: We started such a database initially for our own use, so we have some but not all. You can never be 100 percent complete because there are works in private collections, so the project was limited in scope, but it could help us see where to reach out. The main thing I would like to convey is that for us it is crucial that all these works in the US are painting a picture of our country that we value, and that we appreciate it when the works are taken care of. Arthur Wheelock in Washington, D.C. has made key contributions in this regard, including with his exhibition of Dutch maritime works. [Water, Wind, and Waves: Marine Paintings from the Dutch Golden Age (July 1 through November 25, 2018)]. Paintings are informal ambassadors for our country. They tell our history in pictures. In fact, I find it interesting to learn how early these works started coming to the US.

Louisa: Yes, many paintings are listed in early 17th century inventories from New Amsterdam/New York and Beverwijk/Albany, although it is impossible to firmly identify them in extant works today. In the 18th century, there is a spottier record of acquisition of Dutch paintings, but by the early 19th century, collectors such as Robert Gilmor started bringing works of much higher quality to this country.

Joost: Of the known Rembrandts, 40 percent are in the United States.

Louisa: Part of that is historic, based on timing. For instance, in the case of Vermeer, the collectors who had money when the beauty of Vermeer’s work was rediscovered in the 1860s were the titans of America’s Gilded Age. We have 14 Vermeers in this country, if you include the one stolen from the Gardner museum. There are only seven in Holland!

Joost: Another aspect I’m interested in is our shared history, our shared cultural heritage. It’s incredible how interested Americans have been in owning Dutch art. The care they have taken in that respect creates a bond between our two countries.

Louisa: Yes, Americans do care about Dutch art. In 2007, Walter Liedtke made a show of all the Dutch paintings in the Metropolitan Museum with a wonderful catalogue. I was amazed to see people you wouldn’t expect, on the subway, reading the catalogue, which was large, and talking about how they were looking forward to seeing the show. Historically, American portraiture has roots in Dutch portraiture. Our early portraitists learned from prints made after Dutch paintings that were brought over in the early 18th century. American 19th century landscapists and genre painters also drew heavily on models of the 17th century Dutch.

Joost: Yes, all of this makes us happy to help in any way we can. Are there other HNA activities we might collaborate on?

Louisa: Well, we have floated the idea of doing little conferences around the country, just an afternoon here or there. That would help activate centers of Dutch art away from the coasts. Perhaps we could collaborate on something like that.

Joost: First stop, West Michigan. I know at least one collector who owns a little Rembrandt etching and some 19th century paintings. It’s an area where the people have strong Dutch roots and people are quite proud. There’s an art museum in Grand Rapids. I think people there could be quite interested. They would welcome a gathering like that. This would be reaching out beyond the east and west coasts. That would be a good place to go: Holland, Michigan.

Louisa: I’ll run it by our membership!