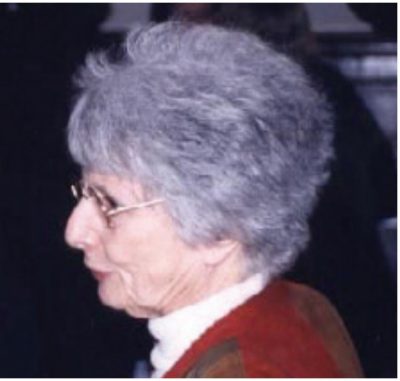 Members of the HNA probably know Anne van Buren, who died this month after a short illness, for her deep knowledge of fourteenth- and fifteenth-century Netherlandish art, especially of manuscripts. She was as well known to European as to American members, at home (literally) in France, and blessed with an unusually international background, having a Swiss mother and a father who grew up in francophone Cairo. Her education was likewise expansive and exceptional. Anne was trained as an astronomer, and was proud of having won her first academic honors in the national science scholarship competition that took her through Radcliffe. She carried her scientific training into art history, always beginning a project with what could be verified, and building carefully on physical evidence. It is not surprising that she later felt comfortable applying the techniques of infrared reflectography to panels and manuscripts.

Anne came to art history comparatively late in life, after launching four children, and earned her doctorate from Bryn Mawr in 1970. She found her enduring subject in late medieval manuscripts, under the tutelage of L.M.J. Delaissé at Oxford. Her dissertation on Burgundian illumination and the Chroniques de Hainaut was published only in an article, but she returned several times to the material, chasing down the artistic personality of Dreux Jean among other miniaturists, expanding her scrutiny to include sculpture and incunables, and, in a masterful commentary volume on the Turin-Milan Hours, proposing a scenario for the book’s clearly tortuous history that clarified Jan van Eyck’s participation.

Her professional life was enriched by her close fifty-year marriage to another scholar, the theologian Paul van Buren, whose work took them to Geneva, Heidelberg, Texas, Philadelphia, and Cambridge. Anne taught at Tufts University from 1975 until 1984. Ordinarily, perhaps, she would have obtained a teaching position that would have allowed her to guide generations of doctoral students. Instead she offered help and advice outside formal programs and across disciplinary boundaries. (I was lucky enough to work with her at Tufts, in a department that had no doctoral program to diffuse all that brilliant energy away from undergraduates, and I benefitted from her guidance well beyond the statute of limitations for undergraduate education.) She left full-time teaching, but took short appointments at Brown University and the University of Amsterdam. After Paulʼs death, she spent more time in New York City, and continued her work on dress in medieval manuscripts, to be published by the Morgan Library, and coordinated with a forthcoming exhibition.

Anne was using fashion as a tool for art history as far back as her master’s thesis in 1964, when she suggested that Cézanne’s portraits of his wife could be dated by the dresses she was wearing. She took up dress studies again in the 1980s to delve into the material she knew best: Northern European art from the fourteenth and fifteenth centuries. Her approach gained in sophistication as art history in general grappled with concepts of representation, so that the theoretical component of the project grew alongside the practical. Moreover, her collection of reliably dated images, initiated as a tool, began to suggest its own avenues of research: she found that certain late medieval painters not only recorded current fashion, but they used outmoded fashion to indicate events in the past. Studying medieval dress is complicated not only by the dearth of surviving works but also by the need to sort out the often imprecise medieval terminology encountered in payment records, grammar books, and fiction (a few of her textual sources), and the need to distinguish between actual and fantasy dress. Teasing out the history of terms while looking for examples in datable works of art, each of which of course presents its own knotty problems, provided Anne with a worthy subject. The difficulty of any one of these aspects of the study of medieval dress explains why the project absorbed her attention for decades, and why its completion, as According to their Estate: Dress and Costume in the Art of France and the Low Countries, 1325-1515, is such an achievement. Roger Wieck, who has been closely involved with the book, has agreed to see it through to publication. As a monument it will be, I think, suitably extraordinary.