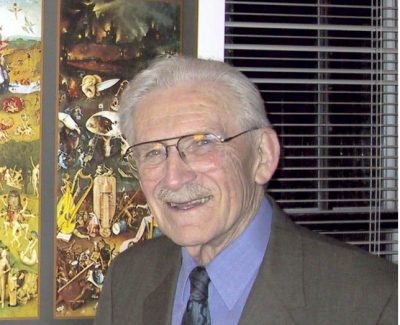 Charles D. Cuttler, Professor Emeritus at the University of Iowa and first President of the Midwest Art History Society, died in New York City on January 16, 2008, at the age of 94. The cause of death was pneumonia contracted during his convalescence from neuro surgery last June. His death marked the end of a sixty year career as a teacher, mentor, and scholar. To the literally hundreds of students, friends, and fellow scholars on two continents who knew him, he will be remembered for his love of art of all periods, his seemingly endless energy, his exacting standards for scholarship, and his unfailing good humor. To the thousands of readers who never knew him personally, his published works, especially Northern Painting from Pucelle to Bruegel (1968) allowed them to share his infectious enthusiasm for art North of the Alps, presented in a prose style that made the art of this period alive to the general reader. For the scholar, his many articles helped decipher the enigma of Hieronymus Bosch, the focus of Cuttler’s life long scholarly obsession.

Born in Cleveland, Cuttler studied watercolor painting at Ohio State University where he received his BFA in 1935. His interests subsequently turned to art history. He completed his Master’s degree from Ohio State two years later; his MA thesis on the painting technique of Flemish artists was truly an attempt to combine his interests in both the production of art with its history. Something of a double threat as an artist and emerging art historian, he received his first academic appointment as assistant instructor in drawing and art history at Ohio State, 1935-37.

Between 1937 and 1939 Cuttler pursued his doctoral studies at New York University as one of America’s first generation of students to receive instruction from German expatriates escaping Nazi Germany. Cuttler was also one of the first students to study art history at NYU’s newly formed Institute of Fine Arts which Walter S. Cook had established as a separate entity near the Metropolitan Museum of Art in 1937. The faculty that Cook recruited for the Institute is legendary, as he augmented the existing faculty at the Institute with German scholars. Cuttler and so many other young American medieval and Renaissance students were able to choose coursework from Cook, Adolph Goldschmidt (1936/37), Walter Friedlaender, Karl Lehmann, Richard Offner, and Martin Weinberger. Weinberger, along with the Renaissance scholar Guido Schoenberger, became Cuttler’s advisers. By the time Cuttler enrolled in the Institute, Erwin Panofsky had already accepted a permanent position at Princeton’s Institute for Advanced Study in 1935. However, Panofsky continued to lecture at NYU and Cuttler acknowledges working with him on his dissertation, “The Temptations of St. Anthony in Art from Earliest Times to the First Quarter of the Sixteenth Century.” Despite the threat of war in Europe, Cuttler augmented his studies at the Institute with two summer certificats in art history, one for study at the Université de Paris in 1937 and the other from the Université de Bruxelles, 1939.

World War II interrupted Cuttler’s studies as he contributed to America’s war effort on the home front. During the years leading up to the war and afterward, his studio experience as a draughtsman allowed him to work as a designer and engineering checker for heavy weapons production in Detroit between 1940 and 1947. In December 1941, he married Mary Cecilia Fuller, and the couple had two children, Judith Ann and Bernard Austin.

In 1947, Cuttler accepted his first permanent academic position at Michigan State University. Simultaneously, he continued work on his dissertation at NYU, which he completed in 1952. He stayed on at Michigan State for five more years, with summer appointments in 1952 and 1953 at Indiana University. In 1957, he joined the art history faculty at the University of Iowa, where he retired as Professor in 1983.

From 1957 through 1984, Cuttler published a series of articles on Hieronymus Bosch which would collectively establish his reputation as a Bosch scholar of international importance. Cuttler approached Bosch’s art as a medieval scholar, bringing to Bosch’s art his own vast knowledge of Gothic and Late Gothic manuscripts and prints. Armed with this knowledge, Cuttler was able to explain each of Bosch’s major paintings in detail, interpreting virtually every motif in paintings such as the Lisbon Temptation of St. Anthony within the thematic heritage of images certainly known to the artist. Through this methodology, Cuttler convincingly demonstrated how Bosch consciously manipulated iconographic tradition to create his own visual sermons on humankind’s eternal struggle with the forces of good and evil. Cuttler saw Bosch as the ultimate pessimist functioning as a veritable moral commentator on a broad myriad of late medieval religious beliefs in the Netherlands. To show the origins of Bosch’s artistic sources, Cuttler’s writings are filled with fascinating accounts from prints, paintings, and manuscripts of episodes from the lives of saints, early portrayals of wild beasts, exotics, and belief in witchcraft, among other subjects. Toward the end of his career, Cuttler sought closure to his years of thinking and writing about Bosch. The result of his efforts is his last book, one devoted exclusively to Bosch. Completed just months before Cuttler’s final illness, the volume is currently forthcoming from Pindar Press, London.

Cuttler’s university teaching style could best be characterized as ‘encyclopedic.’ In addition to seminars, he regularly taught separate courses on medieval and Northern Renaissance art, each offered as a year-long course in two consecutive semesters. In those days before digitalization, he would always lecture from the back of the room, operating the slide projectors himself as he orchestrated a kaleidoscope of images, alternating dual projections combining old lantern slides with those in 35 mm. format, many of which he had photographed himself. In 1960, he began recording his lectures on reel-to-reel tapes. At the end of each day, his wife Cecilia would laboriously transcribe his spoken lectures into typed pages. For the next few years, he and Cecilia would edit and retype countless versions of his narrative to create Northern Painting from Pucelle to Breugel, published in 1968 by Holt Rinehart Winston. James Snyder followed Cuttler’s book with his own volume on Northern Renaissance Art in 1985, and Jeffrey Chipps Smith recently published The Northern Renaissance in Phaidon’s Art & Ideas series (2004).

Before Cuttler’s book, the material available in English to the general student was dominated by Erwin Panofsky’s 1953 Early Netherlandish Painting, but this work purposely focused only on the origins of Flemish painting. Max J. Friedländer’s From Van Eyck to Bruegel appeared in English translation in 1956, but it was a volume originally authored in 1916. Friedländer’s monumental 14 volume, Die altniederländische Malerei (1924-1937), was not completely translated until 1976. Crucial volumes on the study of Northern European art, such as those by Charles Sterling on French painting, Alfred Stange’s multivolume study of German painting, and G.J. Hoogewerff’s discussion of sixteenth-century Dutch art have never been, and probably never will be, translated into English. Cuttler distilled the vast literature on the period, virtually all in foreign languages, into a coherent survey of the contributions of Northern artists, all placed within the historical and cultural milieu of the period between the 1320s and the 1560s. The volume was profusely illustrated at Cuttler’s insistence with the highest quality black and white gravure prints, as opposed to less expensive (and less accurate) offset lithographic prints. Thirty-four full-page color reproductions helped communicate the vibrancy and richness of the paintings themselves. Originally published in an edition of 20,000, the book was revised by Cuttler and reprinted in a soft cover edition in 1991. Cuttler’s Northern Painting from Pucelle to Bruegel can be arguably regarded as still the most comprehensive treatment of the subject, in a single volume, in any language.

Throughout his life, Cuttler received numerous academic honors. He received a Carnegie fellowship, 1937; he was named a senior Fulbright fellow, Brussels, 1965-66; he was elected as an Associate Member of the Royal Academy of Sciences, Literature and Fine Arts of Belgium, 1987; and an Honorary Lifetime Member of the Historians of Netherlandish Art, 1986. He was a member of the College Art Association for 67 consecutive years. In 1971, he and James Breckenridge of Northwestern University, convened a meeting in Chicago to discuss the need for a regional society of art historians. The result of this meeting was the Midwest Art History Society, which Cuttler incorporated in the state of Iowa in 1972. He was the organization’s first president and served on the Board for over two decades. A special session at the April 2-4 meeting of the Midwest Art History Society in Chicago was dedicated to him.