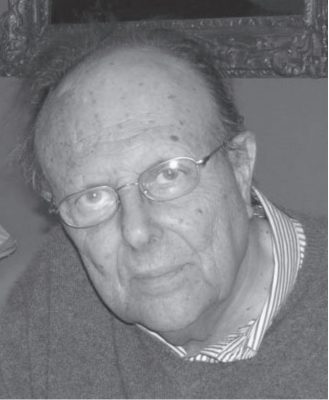 Michael Montias, as he preferred to be known, lost his battle with cancer in late July, after a prolonged and courageous struggle. He was one of the greatest innovators in the field of Dutch art history, although he was trained as an economist and only came to art history in the middle of an already distinguished career.

In Michael’s own words, his interest in Dutch art was piqued as a teenager, when he came across a copy of Wilhelm von Bode’s vast, multi-volume study of Rembrandt, now long out of date but then the catalyst for his prolonged interest in Dutch painters. This seed was not to germinate until twenty years later, when Michael met Egbert Haverkamp-Begemann at Yale, where they were both professors. A polymath, Michael had explored a career in chemistry after reading a book on the periodic table, and considered a dissertation at Columbia on the prices of Dutch paintings at auction. However, his interests soon turned to economics, specifically comparative economic systems in the Soviet Bloc. It was in this field that he defended his dissertation and published extensively (e.g. Central Planning in Poland, 1962; Economic Development in Communist Romania, 1967). But his interest in Dutch art never flagged; in 1975 Michael received a summer grant to study the guild system in seventeenth-century Holland. Like Hans Floerke before him, he intended to survey the material, but now bringing to the equation his own expertise in statistical analysis and comparative economic systems. Michael so loved the project that soon he had absorbed virtually all of the relatively small archive of Delft, where he began his research. The results appeared in 1982 in a book that permanently altered the course of Dutch art history, combining that discipline with the field of economics in a way that was unprecedented, yet became intelligible to all (Artists and Artisans in Delft. A SocioEconomic Study of the Seventeenth Century). From this pioneering work a new subfield was born, combining statistical study with an in-depth understanding of cultural history, a road later followed by several distinguished economists and historians.

Vermeer had always attracted Michael, and his archival pursuits began with this artist. In his first week in the archives in Delft, before he had fully mastered the Dutch language (let alone the cryptic archival script of the time) Michael found an unpublished document that mentioned Vermeer. That Friday evening he invited me to his third-floor walk-up in Delft to see what he had unearthed, and already he had written out three pages in longhand analyzing his relatively minor discovery. It was exhilarating to listen to him read this essay with an excited curiosity and infectious enthusiasm that never faltered, characteristics that would endear him to his readers and continue to inspire others through his published works. This material, along with hundreds of other documents that were studied in detail by Michael, led to his magisterial Vermeer and his Milieu. A Web of Social History (1989). The operative word in this title was “web”, because the material was more complicated than a spider’s web; only Michael had the consummate patience and delight in intricacies to follow all the strands of the fragmented remains, resurrecting an extended family that lived more than three centuries ago and endowing them with an importance as pressing as our own.

Michael’s interest reached beyond the archives to enliven these old papers with his extensive knowledge of history, languages (he was fluent in at least a dozen) and paintings. He loved the objects as much as the documents. When I met him in Dordrecht, where he stayed for a while in the mid 1970s, he showed me a shovel he bought in the local hardware store. As a weekend hobby he used this tool to excavate vacant building lots, unearthing everything from shards of pottery to clay pipes. This too he relished beyond measure, perhaps because it was not so different from his digging in the archives during the week.

Michael’s urge to possess objects from the past materialized in his collection of Dutch seventeenth-century paintings. He could afford little on his professor’s salary and all the major purchases were a struggle, but he never strayed from his devotion to acquisitions. It was only after protracted payments and serious fiscal hardship that in 1968 he managed to secure Goltzius’s wonderful Magdalen (now on long-term loan at the Metropolitan Museum of Art). In 1979, when Michael stumbled across an anonymous painting representing an Allegory of the Love of Virtue at Christie’s in New York, he froze in place, mumbling to me that the painting (or one exactly like it) had been fully described in a document in the Delft Municipal Archives, where it was described as the work of Giovanni del Campo. Michael simply had to acquire the painting, no matter what. Happily, he did buy it and it now hangs on permanent loan to the Princeton University Art Museum. The painting was subsequently attributed to Valentin de Boulogne by Pierre Rosenberg, and it was included as such in the comprehensive exhibition, Seventeenth-Century French Paintings in American Collections. Although Michael published the Del Campo document and his painting in Egbert Begemann’s 1982 Festschrift, he was always uncomfortable with the attribution to Valentin. I only wish that he could have lived to see the final outcome of this debate, which might very well be resolved in accordance with Michael’s initial attribution to Del Campo. He also bought a beautiful Magdalen by Jan de Bray, which turned out to be fully signed and dated after a light cleaning. Had the inscription been known, he would never have been able to afford the painting. For an economist, Michael had a surprising disregard for money on a personal level. He loved what money could buy in the field of art, but never sought personal financial gain or creature comforts for himself. He once bought a painting attributed to Frans van Mieris, knowing that I was already preparing my dissertation on the artist. When I convinced him that his new acquisition was a later copy, he handed it over to me, saying: “Here, it’s better in your hands.”

After exhausting the Delft archives, Michael moved on to the motherload – the massive archives of Amsterdam. Undaunted by the enormous challenge, he began a thorough investigation of seventeenth-century auctions, returning to the subject he had first envisioned while a graduate student at Columbia. The result is his last book, Art at Auction in 17th Century Amsterdam (2002), wherein he addresses the various roles of auction sales, collectors and art dealers in the art market with his usual eye for critical detail. So plentiful was the material and so enthusiastic was his personality, that it is no surprise that he was extremely prolific, publishing numerous articles on his finds and conclusions. Although by the end he was quite ill, he managed to write one last article devoted to attributions in Amsterdam inventories that will appear in Simiolus next year.

One insight that stands out from his various articles is his discovery that prices were linked to style. For example, by compiling valuations from seventeenth-century inventories, he demonstrated that a broadly painted landscape was less expensive than a minutely rendered genre scene, simply because the former was more quickly executed. He quantified the fact beyond a shadow of a doubt that even in Holland, that burgeoning birthplace of modern capitalism, “Time is Money.”

As one reads back through Michael’s art historical writing, it is remarkable to see so many points of inquiry – statistical, aesthetic, cultural, historical, sociological, to name only the most frequent – that he used to interrogate his subjects. He had an amazing memory, and his ability to recall anything he ever heard or read informed all his writings. He was unfailingly generous with his finds and always eager to discuss any obscure genealogical connection. He will be much missed in the many communities where his boundless curiosity found him active. Art History stole Michael away from Economics, but death robbed Art History of a beautiful mind.

Editor’s Note: An endowment fund has been established in John Michael Montias’s memory (see President’s message). Those wishing to make a contribution are asked to send a check to Kristin Belkin (23 South Adelaide Avenue, Highland Park, NJ 08904), made out to Historians of Netherlandish Art, with “Endowment Fund/Montias” written in the memo line. European contributors are requested to pay into the Historians of Netherlandish Art European Account (Postbank Berlin, within Germany: acct. no. 0744 146 108; BLZ 100 100 10; from outside Germany: IBAN DE88 1001 0010 0744 1461 08 and BIC PBNKDEFF), citing “Endowment Fund/Montias”.