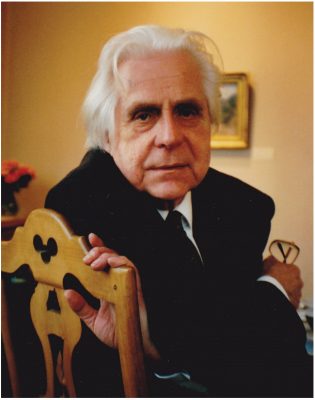 Werner Sumowski, professor emeritus of art history at the University of Stuttgart, passed away in Stuttgart September 3, 2015. As research assistant since 1963 and professor from 1973 to 1993, he shaped the lives of generations of students with his humor, profound knowledge and deeply humanistic thinking. His scholarly reputation rested above all on his sixteen volumes of the paintings and drawings of Rembrandt’s pupils. As the art historian and Rembrandt expert Gary Schwartz writes, he knew “more about the Rembrandt school as anyone ever alive.”

Werner Sumowski was born March 8, 1931 in Ortelsburg in Masuria, today Sczytno in Poland. He ended up in Berlin as war orphan where he studied with Richard Hamann at Humboldt University in East Berlin, publishing his first articles in 1956. Two years after Hamann, founder of the photographic archive in Marburg in 1939 and a decisive representative of an all-German art history, was forced in 1957 to resign from his position, Sumowski fled to the West. In 1963 he became research associate of Heinz Wetzel at the then Technische Hochschule Stuttgart. He did his habilitation with a study on Caspar David Friedrich, becoming ‘Privatdozent’ in 1967. After the publication of his Friedrich work, he was appointed ‘Universitätsdozent’ in 1971, ‘außerplanmäßiger’ (unscheduled) professor in 1973, and full professor in 1979.

Rembrandt occupied Sumowski all his life, following his teacher Hamann who, originating from modest circumstances, was attracted to the bourgeois art of the Netherlands. Hamann’s book on Rembrandt appeared in 1969 in a new edition with Sumowski’s annotations. The latter had travelled to the Netherlands as early as 1955, subsequently writing an essay on a hitherto overlooked Rembrandt drawing. Starting in 1979, Sumowski published his ten-volume opus on the drawings of Rembrandt’s pupils. The six volumes of the paintings of Rembrandt’s pupils of 1983 – with later additions – contain 99 artists known by name and more than 2,500 works. Werner Sumowski, like Richard Hamann, placed special emphasis on strict formal analysis. “Nun guckt mal schön” (“Now look carefully”) he used to tell his students when he instructed them to date a painting, drawing or print, to determine its technique and special ductus, to decipher its iconography and if possible to assign it to an artist, a stylistic period, or special historic situation. As he liked to tell his students, he wanted to turn them into ‘Bilderwürmchen’ (picture worms) and not ‘Bücherwürmchen’ (bookworms). However, pictorial analysis for him was not an end in itself but opened the way to the understanding of broad relationships. Thus he succeeded in a seminar on artists’ colonies of the early twentieth century, before the backdrop of Wilhelminian salon art, to work out the motivations of the lifereforming attempts and the modern art movements of the time. At the same time he visualized those developments that later would lead to National Socialism.

Loss of parents and native country, dictatorship, war and the difficult situation of a budding art historian in the German Democratic Republic turned Werner Sumowski into a pessimistic, disillusioned man. Not without irony he referred to himself barely sixty years old as an old ‘Tattergreis’ (dodderer) who had one foot in the grave. At the same time he knew as no other how to instruct and entertain his audience. Even on late Friday afternoons crowds of students flocked to his lectures. On the occasion of his retirement they hung bedsheets between the two high-rise buildings on the Keplerstraße in Stuttgart on which they wrote: “Sumo, we thank you!”