On August 7, 2017, Ronni Baer received the honor of Knight in the Order of Orange-Nassau in a ceremony held at the home of Dolph Hogewoning, Consul General of the Kingdom of the Netherlands to the United States of America. Ronnie’s distinguished career as William and Ann Elfers Senior Curator of Paintings, Art of Europe at the Boston Museum of Fine Arts, is highlighted most recently by the 2015 exhibition Class Distinctions in the age of Rembrandt and Vermeer, opened at the BMFA by Princess Beatrix. This grand exhibition brought together some spectacular paintings, and focused on social aspects of Dutch seventeenth century art. In Ronni’s words, “It is touching that my work to further the appreciation of Dutch art and culture has been honored in such a meaningful way.” The ribbon was pinned by the Consul General.

Tessa Dikker, Press and Cultural Affairs Officer, most capably organized this event, which also also marked the departure of Jan Kennis and the arrival of Joost Taverne in the post of Dutch Cultural Attaché in New York. The HNA has benefitted greatly from the support of the Dutch Cultural Office in New York, in particular by generously contributing to our 2014 Boston conference, and our receptions during the College Art Association conferences in Washington in 2016 and New York in 2017.

Photographs from the Study Day in conjunction with the Class Distinctions exhibition, held October 5, 2015, and from the following day’s exhibition opening featuring a royal visit, can be viewed here. 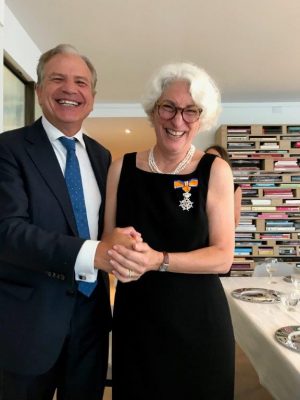 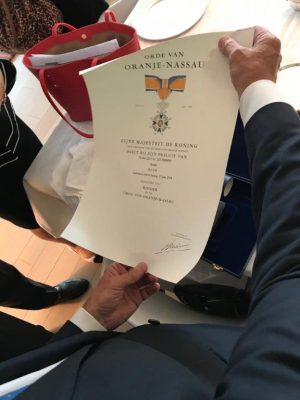