Call for Papers
April 26-27, 2019 Toronto
Centre for Reformation and Renaissance Studies
Victoria College in the University of Toronto

During the sixteenth and seventeenth century princes and the nobility found tomb sculpture an effective means of refashioning their identity and promoting their interests in a rapidly changing society. Enormous funds were spent on these monuments, often well before the occupants’ death or by their heirs, for whom the sepulchers became a generalized marker of family status. Epitaphs were also fashioned of words, penned in ink and published as well as engraved in stone. Poetical tributes and eulogies to rulers gave them another type of public persona.

For this conference we wish to focus on the agency of these creations in the social and political arena of Northern Europe and Iberia. Previous discussions have concentrated on the culture of death and remembrance. Although these concepts are integral to any consideration of tombs and epitaphs, we want to concentrate here on their broader cultural significance.

We are interested in the ways tombs and epitaphs helped establish a viable image for leading families and facilitated participation in important networks. In which ways did tombs and epitaphs take part in the debates fostered by the Reformation and the Catholic response? How was inquiry into different religions reflected in tomb sculpture? And how did notions of presence inflect the design of and response to these monuments? In which ways did these works extoll virtues of conquest and triumph? How did monuments to military heroes, noble and commoner, evolve in this period? How did gender alter the equation? How did the tombs of the upper bourgeoisie and professional classes relate to the monuments of the nobility? How did the choice of materials effect the perception of these objects? And how did carved monuments related to memorial representations in other media such as painting and prints?

Networks of artists, writers, academies, patrons, and their agents soon formed, and knowledge of renowned monuments spread throughout Europe, via travel and by reproductive drawings and prints. What formal languages were adopted by the elite and their artists and what sort of communication was there between the different regions of Europe? Were there particular sculptors or writers who developed enduring paradigms?

We welcome papers of 20 minutes devoted to these and related issues. Please send an abstract of 200-300 words and a brief cv by March 31, 2018 to Ethan Matt Kavaler (University of Toronto) at matt.kavaler@utoronto.ca and to Birgit Ulrike Münch (University of Bonn) at bmuench@uni-bonn.de. Participants selected will be notified by June 2018. 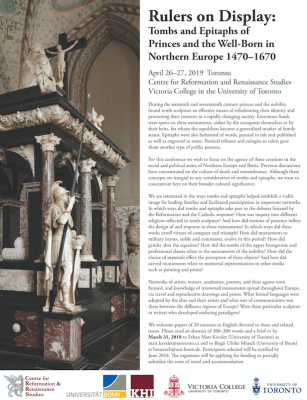