The Alte Pinakothek is breaking new ground with this first monographic exhibition on the enigmatic painter Jacobus Vrel and by juxtaposing the Old Master with current works of contemporary art.

His pictures are idiosyncratic, his figures odd and his street scenes stage-like. The works of Jacobus Vrel have frequently been mistaken for those by the famous painter Johannes Vermeer. His street scenes and interiors are included in the holdings of the best-known museums in the world and are, at the same time, much sought-after rarities among collectors. However, to this day, Jacobus Vrel has remained virtually unknown – and, despite extensive archival research work since his discovery in the 19th century, it has not been possible to find any details about his person or where he worked.

Jacobus Vrel’s works seemingly reflect everyday life in a small Dutch town in the 17th century while creating enigmatic worlds at the same time in which the viewer is not addressed in any way at all. The figures turn away from us, show only their backs or appear lost in thought. The depictions even exude, in part, an oppressive stillness. Not without reason a close affinity to the well-known Dane Vilhelm Hammershøi (1864–1916) has repeatedly been construed, whose atmospheric compositions, however, were created two centuries later.

Equally unusual are Vrel’s street scenes. The spatial arrangement of the buildings shown is reminiscent of film or theatre sets. It is difficult to find comparable examples from the painter’s own time. There are neither plausible paradigms nor are there any clear similarities to the works of better-known fellow artists. Always in vertical format, the compositions show multi-storeyed but slender brick houses, mostly with pointed gabled roofs, lined up close to one another. Only a few figures populate the narrow alleyways paved with cobblestones. Are these real places that Vrel has rendered here or are they the painter’s invention, bearing no semblance to his immediate surroundings?

Together with the Fondation Custodia in Paris and the Mauritshuis in The Hague, the Alte Pinakothek in Munich is staging the first monographic exhibition on the mysterious painter Jacobus Vrel and, with 35 paintings by Vrel, focuses on this harbinger of modernism whose secret is only revealed at second glance. The new findings of the international project do away with the preconceived notion of a ‘Vermeer du pauvre’ – the poor-man’s Vermeer – and show that Vrel is to be seen much more as a precursor of Pieter de Hooch and Vermeer and not as their successor.

The juxtaposition in the Alte Pinakothek of the some 50 paintings and works on paper by Vrel and related Dutch Baroque painters with works of contemporary art (Mathilde ter Heijne) and art films produced specifically for the exhibition, created in cooperation with the Academy of Fine Arts, Munich (Julian Rosefeldt), the University of Television and Film Munich (Daniel Lang) and the Technical University of Munich, with architectural models from the Chair of Architectural Design and Conception, is spectacular. The majority of the works made especially for the exhibition by artists alive today correlate both in content as well as aesthetically with the paintings of the Old Master on display. In this way a different approach to the enigmatic works of this scarcely known Baroque painter is offered to young visitors to the exhibition, in particular.

ACCOMPANYING PROGRAMME
An extensive programme of events accompanying the exhibition looks at the works from different positions and disciplines such as film, architecture and literature, and provides a number of innovative approaches and interpretations. The specially conceived art education programme takes participants on a journey of discovery to the 17th century on guided tours and in the most varied of workshops.

PUBLICATION
A comprehensive monograph with a catalogue of all the artist’s works will be published in German, English and French to accompany the exhibition. 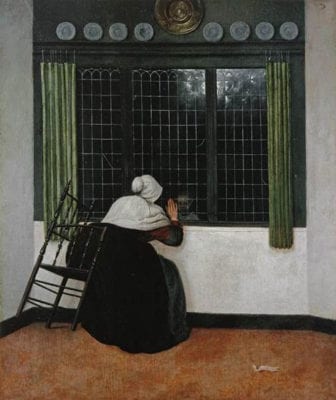 A special exhibition by the Bayerische Staatsgemäldesammlungen in cooperation with the Fondation Custodia – Collection Frits Lugt in Paris and the Mauritshuis in The Hague.

[Text from the museum’s press release]